For the first time ever, I planted one watermelon plant and one cantaloupe plant this year. It was a last minute decision at the nursery and when I brought them home I realized that I didn’t really have a lot of space for them, so I just kind of stuck them where I could find a spot. I had some open space around my two new blueberry bushes, so that is where they went.

These photos were taken on June 29, 09, probably about a month and a half after they were planted.
My cantaloupe: 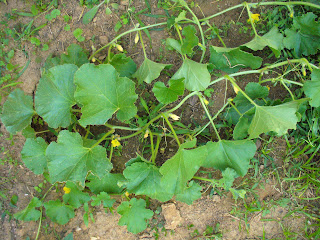 My watermelon. You can see the blueberry bushes on both sides of the plant. 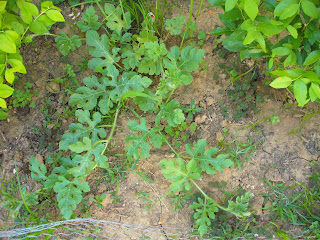 So I guess I was a bit naive, but I really didn’t understand how invasive the plants were going to be, especially the cantaloupe…it has practically swallowed up my blueberry bush and I am having a hard time getting to my square compost bin. 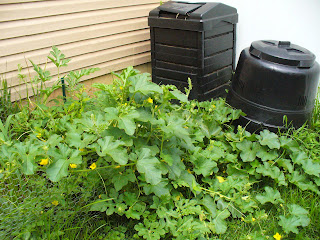 My husband can’t even mow around them anymore because they have grown into the grass.It also doesn’t help that I haven’t pulled any weeds lately. 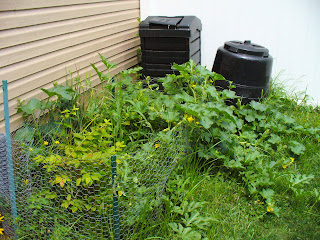 My very first melon…I’m not sure how much longer until I can pick it, but I am growing impatient. I don’t have a lot of patience during the summer gardening season. I want to munch on it RIGHT NOW. 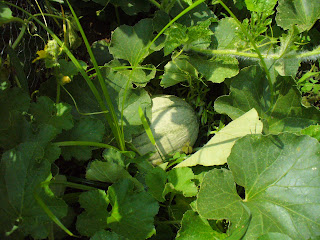 I have figured out the reason for the mammoth cantaloupe plant. Look closely at the photo below of my two compost bins. It was taken on April 20, 09, for a post I did for Earth day. I have since moved the round compost bin to the other side of the square bin so that I could expand the garden against the house to make room for some blueberry bushes. I planted the cantaloupe right on top of where the compost was originally. No wonder it is so huge, the roots are probably having a feast on the earth where compost used to be. 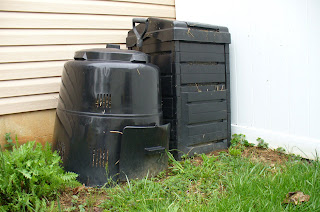 I have got quite a mess, but if the melons turn out to be delicious it will all be worth it.

How is your garden growing?

Thanks for reading FamilyBalanceSheet. If you don’t already receive FBS free updates, please click here to sign up 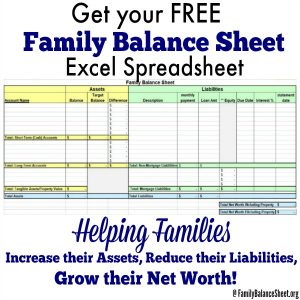