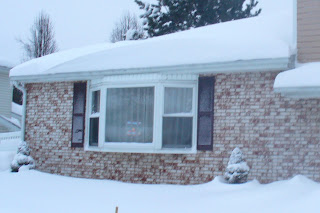 One night this week, as I was cleaning up the kitchen after dinner, my 4yo dd yelled “Mommy, what is this brown stuff in the window?”. My kids like to play in the window well and watch the neighbors walk their dogs.

I was half paying attention and thinking, ‘it’s probably a crayon mark’. Then she asked me sternly again…and again.

Yes, I was zoned out. I usually do that when I’m in front of the sink. As I awoke from my zone, I walked over to the window and thought, ‘OH CRAP’.

The inside of our bay window well totally flooded with a brown liquid.

I stood there stunned and then I felt water dripping on my head. I could see icicles hanging off the spouting outside in front of the window. Apparently the spouting is full of ice and as it is melting the water has no where to go except into my house.

Instead of grabbing a camera so that I could take a picture to show my blogging friends, I grabbed an armful of towels to soak up the water.

Unfortunately there is still alot of snow and ice to melt before the gutter clears out, so I have plastic and towels down to catch the dripping. This photo was taken the next day. You can see in the lower left corner of the picture that the wood is starting to bubble. Who knows what we’ll find in the ceiling once the ice clears out. 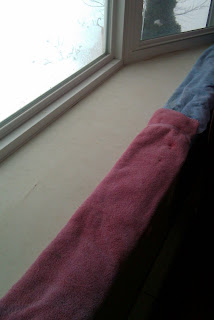 All of this jib jab to say that I am very grateful for our emergency fund. When I called my husband at work to tell him, his first thought was, “Are we going to have to replace the window?”. cha-ching, cha-ching… I don’t think that will be the case, but there will be some repairs needed.
We have debt. We have a car loan, a student loan and a mortgage. But we also have a solid emergency fund. We’re self-employed and it has been essential to our survival. We have dipped into it several times over the years, when business has been off. Each time we made it a priority to build it back up again once we were able to.

I don’t know how much this window is going to cost us, but I do know that we will not have to incur any credit card debt to pay for the repair. And that is a zone I want to be in.