Once again, I am stumped by my own back yard. My readers have helped me identify flowers and vegetables and now I need help identifying a bug.

As I was working in my yard, I noticed a cardinal flapping around on the ground. At first I thought it was injured, because it was really chirping and flapping his wings. But upon closer inspection, it wasn’t injured at all, he was squawking at a bug.

It actually looked like they were fighting. I don’t know if the Cardinal was trying to eat the bug, but I was able to get fairly close to them and the Cardinal didn’t fly away.

I grabbed my camera and got a few shots. If you look closely you’ll see a green bug in front of the Cardinal. 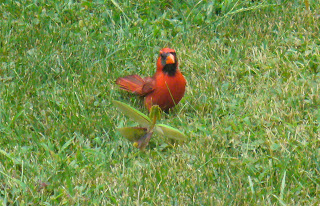 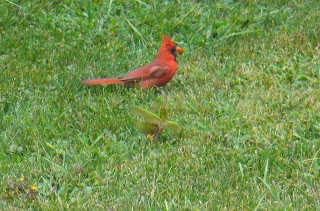 Eventually the Cardinal left and I got a closer picture of the bug. At first I thought it was a Praying Mantis, but when I googled for images online, I’m not so sure it is. This bug had quite a wing span and the pictures I found online didn’t show that. 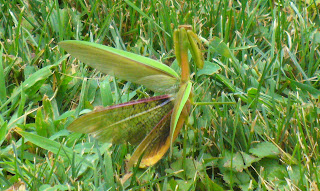 Does anyone have a clue what kind of bug this is? Please let us know in the comments.