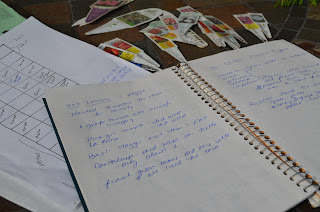 The summer garden season is winding down for me. I have a lot of green tomatoes still hanging, but the majority of what I grew has been harvested. I am hoping there will be enough hot weather left for the tomatoes to turn red.

As I begin to clear out the garden, I am making notes for next year. I have been keeping a garden notebook ever since I started my garden back in the summer of 2002 and it comes in handy year after year. At the beginning of each year, we write down our outside projects. This year, we replaced the dirt in my square foot garden, built a vertical trellis, planted perennials around our patio, and a slew of smaller projects. The good news is that we crossed almost everything off of the list.

At the end of the summer, I take notes to help me remember some things for the next year. The varieties of vegetables that we really liked, flowers that did particularly well in containers, annuals that proliferated, perennials that I’d like to plant, along with some mistakes that I want to avoid going forward. One note that I made was to read about starting annual flowers from seed for next spring. I planted impatiens through out the flower beds this year to add some continuous color. I would like to plant some more next year, but I want to try to save some money by planting them by seed. My new-to-me mini greenhouse inspired me.

Do you keep a garden notebook? What are some lessons that you learned this year? Let us know in the comments.

This post is linked to Tuesday’s Garden Party at An Oregon Cottage.