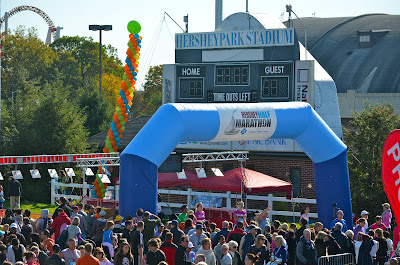 In 2010, a very close friend called me excitedly to tell me all about her first half-marathon. If she can do it, I can do it, she told me.

My friend and I used to run together in college…ok, so our destination was Dairy Queen, but it was at least a 3 mile run round trip. My point is that in our youth (ahem, some 20 years prior) we were at the same fitness level. So, if she can do it, then so can I. Just maybe, I could run a half-marathon.

I decided that I would never know until I try.

Running wasn’t completely new to me. I ran my first 5ks in my early twenties. And in my early 30’s, I competed in several sprint triathlons. I found over the years that if I didn’t have an event to work towards, I could easily talk myself out of exercise.

However, once I became pregnant with our first daughter in 2005, at the ripe old age of 35, I stopped running completely and took up walking. I continued to walk after she was born and kept going through my second pregnancy.

On May 1, I registered. I was so giddy and excited about it; I was going to run my first half marathon. I searched for training plans and found a 10 week training plan written for a newbie like me.

In October 2011, I finished my first half marathon.

I was so pumped when I crossed the finish line, but I was also glad it was over. Any question in my mind that I might want to train for a full marathon was quickly nixed in the last mile; 13.1 miles is insane. But I immediately knew that this wasn’t my last half. I had a blast the first 12.1 miles. I spent the time focusing on my breathing, listening to the awesome tunes my husband loaded onto my iPod, running next to total strangers, and just taking it all in. When you are in the back of the pack, you realize pretty quickly that you’re not going to win the race. I was racing to beat my personal goal of a 10 minute mile pace. I did it; I ran the race in 2:08:47.

Over the course of 2011, I learned some lessons about myself and how I respond to goals. To be honest, I think this was the most determined and focused I have ever been about anything.

5 Steps to Succeeding Your Goals

1. Set a Specific Goal
Prior to 2011, my goals would have sounded like, “I want to get into shape.” or “I want to start running again.” Instead, I said, “I’m going to run a half-marathon.” Could I be any more specific than that?

2. Be realistic.
I asked myself, “could I realistically run a half-marathon?” I felt that the answer was yes, if I gave myself enough time to train. Going from running a 5k (3.1 miles) to a half-marathon (13.1 miles) was not going to be easy, but I was giving myself the year to do so. If I found a race in the spring, I wouldn’t have had enough time to train. A summer race was out of the question, because I do not run well in the heat, so the fall race was perfect.

3. Set a Reasonable Time Period
It had been more than five years since I ran regularly, so I needed to be realistic about the time it would take to increase my endurance and my mileage. Again, the fall race was a perfect fit for my goal.

4. Devise a Plan on Paper
To run (and finish) a half marathon, I needed to plan it out on paper. On blank calendar pages, I mapped out my training to build up my running mileage. I found a 10 week training plan from Runner’s World magazineto help me train during the 10 weeks leading up to the race. However that plan recommended that I be at a certain fitness level at the start of those 10 weeks. I committed to running regularly in May when I registered for the race and slowly built up to 6 miles–the benchmark that I needed to be at by August, the beginning of my 10 week training.

I give a lot of credit to finishing the race to that 10 week plan. It was just 4 runs a week for 10 weeks and the plan slowly increased my mileage and then tapered back right before the race. I went into the race feeling very confident that I could complete the 13.1 miles. I will definitely use it again for future training.

5. Enlist Support
I would not have finished the race without the support of my husband. This goal was important to me, so we sat down every week to review how much I needed to run and coordinate my training with my husband’s schedule. My kids also cheered me on through out the training. Two weeks prior to the race, I had a 12 mile training run that I was a little nervous about. I woke up early on a Saturday morning, kissed my husband good-bye and told him that I would see him in a few hours. As I was finishing the run, I turned the corner to go down my street to my house and I could see my girls yelling and cheering for me. They even made a finish line ribbon for me to run through as I finished.

What’s Next?
I had so much fun with this race that I’ve decided to run two half-marathons in 2012: one in the spring and one in the fall. But I also set many other goals for myself for 2012, both personally and financially. Now I need to take these principles that I learned from 2011 and apply them to my new goals. I guess what I really learned in 2011 was that I can push myself pretty hard. Up to that point, I never realized that I had it in me.

How hard will you push yourself to achieve your goals in 2012? Do you have a plan? Let us know in the comments.

Disclosure – This post contains affiliate links that help support this site at no additional cost to you. Thank you for supporting Family Balance Sheet! You can read the site’s full disclosure here.