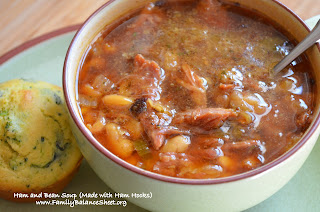 What is a ham hock, you ask? I didn’t know either when my mom bought two for me at an Amish farmer’s market. In quick terms, it’s a joint in a hog’s leg. (You can look it up on Wikipedia for a more descriptive definition, if you are so inclined.)

What you really need to know is that a ham hock makes for a flavorful and hearty soup. The initial recipe that I found online called for the ham hocks to be simmered with dried beans, but my mom suggested that I roast the ham before making the soup as the roasting enhances the flavor. So instead of using dried beans, I used cooked beans that I had in the freezer, but you could also use canned beans.

This soup takes awhile to pull together, so make sure you set aside 4-5 hours to make it, but I assure you IT IS WORTH THE WAIT!

2. Place ham hocks in a large dutch oven and add about a ½ inch of water. These ham hocks were very large. My dutch oven is 6 3/4 quarts and you can see that they fill the pan. (It’s important to use a pan that can go from oven to stovetop, like a dutch oven.) Roast ham hocks for about 2 hours. Do not cover. Warning: Your kitchen will smell amazing. 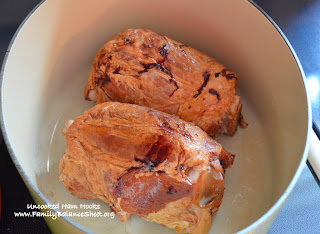 3. Remove the dutch oven and transfer to the stovetop. Turn the stove to low heat and add the onion, celery, and garlic. The bottom of my pan looks burned in the below picture, but it’s not. It is the fat and the flavor from the ham. Saute the the vegetables until they are softened, mix the vegetables in with the flavor on the bottom of the pan. 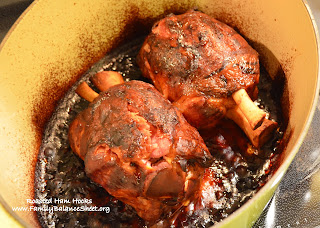 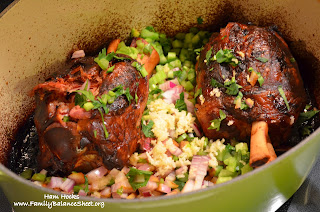 4. Add water to cover the ham, about 6-8 cups. Add the beans, bay leaves, oregano and pepper. Bring to a boil. Reduce to a simmer for 2 hours. 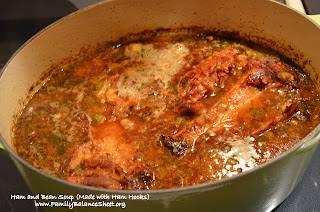 5. After 2 hours, remove the ham hocks and pull the meat off the bone and shred. Add the shredded ham back to the the soup. Discard any fat, the bones, and the bay leaves.

Enjoy this rustic, hearty soup with a garden salad and some artisan bread.