Back in January of this year, I made a bold list of personal goals. Today, I’m happy to report that this past weekend, I achieved one of those goals. In January, I committed to running two half marathons this year. This past weekend, I ran my second one in Hershey, PA. Mission accomplished! 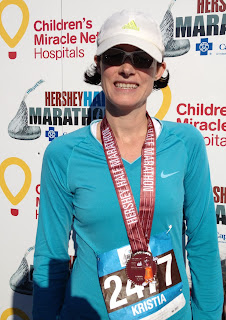 Side note…we won’t get into the status of the other goals, that is not important at this time…

Back in 2011, I made a goal to run a half marathon. Actually I think it was my only goal for 2011. Anyway, I ran the Hershey Half Marathon in October 2011 and I was immediately smitten with the distance. I had a blast, which I realize is a completely ridiculous statement to say about 13.1 miles. But I had such a good experience that in 2012, I made a goal to run TWO half marathons.

In May 2012, I ran my first one for the year, the Pittsburgh Half Marathon. We had an awesome weekend exploring the city and my kids were pretty much convinced that our family should move into a hotel. They were in awe that someone other than themselves made the beds, replaced the towels, and tidied up the room in the morning. The hotel also offered popcorn, lemonade, and cookies in the afternoons. My kids were in heaven.

Anyway, the race was expansive with 25,000 runners and it weaved us across bridges and through the Pittsburgh neighborhoods where the residents cheered us along. It was a hot, but gorgeous day and I beat my previous time by 2 minutes.

After that race, I continued with my training and signed up for the Hershey Half marathon to fulfill my goal.

At 6AM this past Sunday, October 21, I dragged my family out of bed and off to Hershey to run. The weather was brisk, but thankfully sunny. My legs felt good the entire race and at mile 10, I was on pace to beat my Pittsburgh time. At mile 11, I was overcome by a severe side cramp and I thought I was going to hurl Gatorade on the poor soul running next to me, but I suffered through the stitch (without hurling) and willed myself to the finish. The last mile was brutal, but I am happy to report that I beat my Pittsburgh time by 4 minutes with a time of 2:03. I was thrilled. 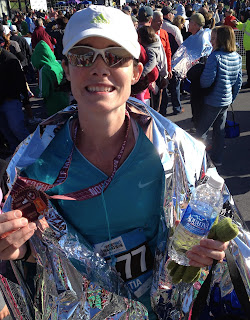 But I’m ready for a break. Except for three weeks in July when I took off to nurse my over-worked right hip, I have been running fairly consistently since January 2012.  The 5:45 AM training runs have been getting harder to make now that it is darker and colder in the morning. My bed calls out to me, “it’s warmer under the covers.” And now I can listen. Aside from the Turkey Trot 5k on Thanksgiving morning, I’m going to take the rest of this year off from running. I’ll do some other form of exercise, like Pilates or Yoga, but I’m hanging my running shoes up until January.

And I’m okay with that, because I achieved a goal that I wasn’t so sure I could accomplish back in January. Mission accomplished!

Where else, but Hershey, PA, can you hang out with candy bars? 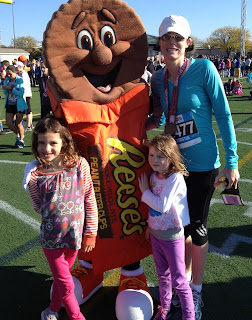 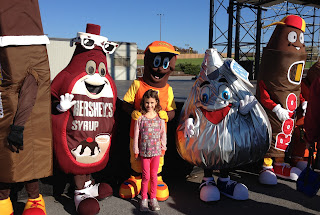 What 2012 goals have you accomplished? Let us know in the comments.

This post is linked to Motivation Monday at A Life in Balance.