Disclosure: I am an Amazon Associate, and if you make a purchase through my link, I earn a small percentage–at no cost to you!  You can read the site’s full disclosure here.

My family cut the cord to our beloved cable TV.  I said good-bye to the real housewives of Bravo TV and my husband said adios to ESPN. (2018 Update: He is now able to watch ESPN. Keep reading for details.) 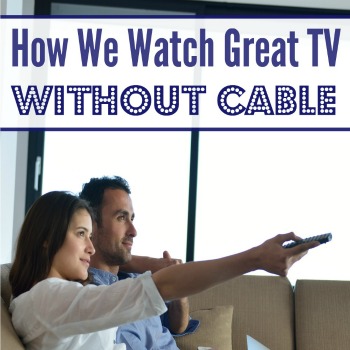 When our bill spiked up unexpectedly, we called the cable company hoping for some relief. Instead we were told that there was nothing they could do about the price, so we walked away from cable completely.

A funny thing happened when I called to cancel our cable, the company all of the sudden had a change of heart about reducing their price. But it was too late–we were done with cable TV.

And ya know what? We haven’t missed cable TV one bit. In fact, my husband said, “it was one of the best decisions we have ever made.”

Although, he almost changed his tune when be found out that the 2014 Super Bowl was going to be on the FOX channel. We have not been able to receive a FOX signal this past year, but thankfully, FOX streamed the Super Bowl online, so that potential crisis was diverted…WHEW!

But don’t let that crisis deter you from possibly walking away from cable TV too. I’m here to tell you that it IS possible to be entertained by TV, watch sports, and spend very little money.

How to Watch Great TV Without Cable

He installed the antenna in our attic and ran coax from the attic to our TV lines using the cables that were originally for our cable TV. He chose the attic over the roof due to the cold weather outside, but the antenna can be mounted on the roof. 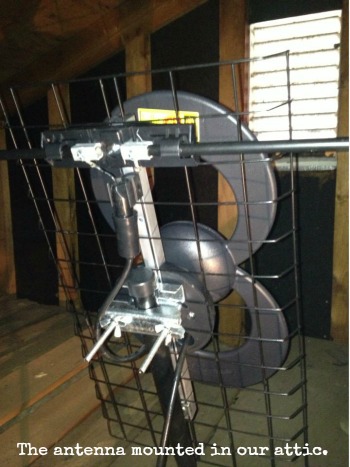 To get reception of the local channels, he went to antennapoint.com to find our nearest digital TV transmitters and used a compass app on his phone to help him point the antenna in the right direction.

At this point the project becomes a 2-person job. As he was aiming the antenna, I was near the TV letting him know (by phone) the status of the reception strength for each channel. Honestly, the strength depends a lot on the topography and distance of the nearest towers. We have been able to get ABC, CBS, NBC, CW, and PBS, along with a few extra channels that the main 3 networks distribute. Those channels are usually older movies and TV series.

We have had difficulty receiving the local Fox channel, but that might have to do with its tower location. It might help if we moved the antenna to the roof, but my husband is in no hurry to go on the roof and we don’t mind not receiving Fox at this time. (2018 Update: We receive the local Fox channel now. It suddenly came on, so whatever was blocking our reception has been moved or fixed, but we never figured out what it was.)

At the time, the cost of our antenna, stand and 50 feet was about $95 on Amazon.

We purchased a Roku 2 Streaming Player for our family room TV. The Roku is just one example of a media streamer. There are others, such Sony, Apple TV, and select DVD players. I do not recall the exact price of our Roku 2, but it is currently around  $70 at Amazon.

—->More about Netflix:
For a fairly low monthly fee, Netflix offers TV shows and movies that you can stream instantly over the Internet. You can watch Netflix from any Internet-connected device that offers a Netflix application, such as a PS3, Wii, XBox, PC, Mac, mobile, tablet or Roku. With a monthly membership, you are allowed up to 5 devices. There are no commercials and you can pause, rewind, fast-forward and replay again and again. The TV shows are not the current season, but Netflix is offering their own original series now, such as House of Cards and Orange is the New Black. Our kids use Netflix and it has a lot of children’s programs to choose from. With regular cable, my kids watched channels like, Disney Jr. and Nickelodeon, but with Netflix Kids, there is so much variety they hardly noticed that we left cable.

—->And Hulu Plus:
For a fairly low monthly fee, Hulu Plus works great to watch current episodes of shows that you might have missed during the week.

Sling TV is an inexpensive option that we’ve been testing. Sign up for the Best of Live TV for only $21/month. The channels include CNN, ESPN, HGTV, FOOD NETWORK, AMC, A & E, TNT, Disney, and more. No long-term contracts, no set-up fees, and easy online cancellation.

3. We Stream from our Computer, but Watch on Our TV.
Many networks stream their TV shows and if it’s a show that the whole family wants to watch, we connect my laptop to the TV with a VGA cable to watch from the TV. This is how we watched the Super Bowl. We’ve also watched current episodes of Duck Dynasty that the A&E website offers for a limited time after the show airs. Check your favorite networks websites to see what episodes are available.

4. We Watch You-Tube.
There are tons of kids movies on You-Tube and my kids will watch on our iPad. Search for your interests and you’ll find all sorts of movies and TV shows. If you want to watch on your TV, just connect your laptop to your TV with a VGA cable, like I suggested in #3.

5. We Borrow from the Library.
When the movie, Saving Mr. Banks, came out, I wanted to introduce my girls to Mary Poppins, so I borrowed the DVD from the library and we had a family movie night. We have also borrowed DVDs of current and older family friendly sitcoms, such as Full House and The Cosby Show. Just make sure you return the DVD in time to avoid a fine.

6. Skip the Screens and Play Games Instead.
As a family, we have greatly reduced the amount of time spent watching TV and instead we’ve found other things to do, such as Apples to Apples Kids or Go Fish (my girls’ favorite games).

My Final Thoughts
Our initial investment for the set-up was about $150, but we were saving $55 a month when we canceled cable, so it paid for itself after 3 months. We now subscribe to Netflix and we are testing Sling TV, and other than the minor blip during the 2014 Super Bowl, we have not regretted our decision one bit. I read more, my husband loves the documentaries that Netflix offers, and our girls don’t even realize we cancelled cable.

Have you considered cancelling cable? Or have you already cut the cord? What has your experience been like? Let us know in the comments.

Disclosure: I am an Amazon Associate, and if you make a purchase through my link, I earn a small percentage–at no cost to you!  You can read the site’s full disclosure here. 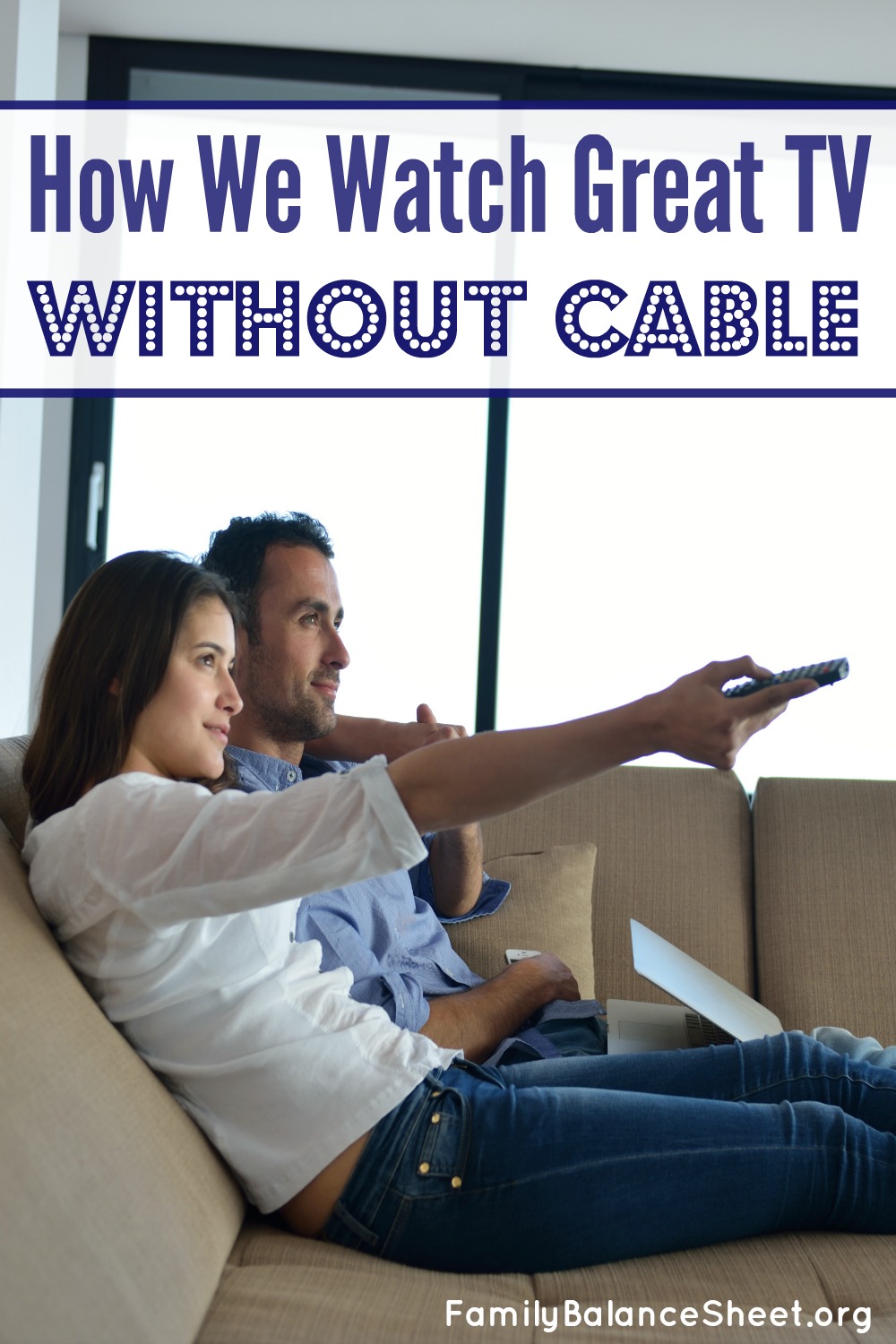