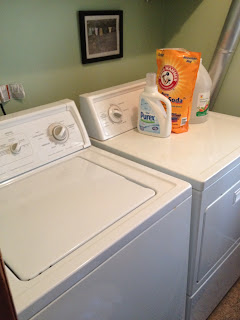 As a wedding gift, my parents bought me and my husband a brand new washer and dryer. Just a few weeks ago, I was smugly admiring the fact that the set was still working very well 12 years later.

On Saturday, we arrived home after a week’s vacation with extended family. I had piles of laundry to clean and started a load 2 minutes after we pulled into our drive way. I then helped my husband unload the van and we started to unpack. When I went to check on the laundry, I opened the lid and saw a machine full of water.

huh! I turned the knob to drain the water and nothing. Not a click. Not a single sound. Not good!

I tried different settings and found that the machine would agitate, but not drain the water.

Do you ever hear ‘cha-ching’ in your head? Well at this time, my head was spinning with ‘cha-ching, cha-ching’.

Have you seen the price of new washing machines? We really don’t want to buy a new one right now!

But never fear, because Google can always find the answer. I typed “Kenmore top loading washing machine won’t drain” into the search engine. Immediately, from various forums and sites, I determined that the problem was the lid switch. I also found a video that gave us step by step instructions to replace the lid switch.

We called Sears to order the part and were told we could pick it up on Monday and the cost was $40. No new washing machine or Sears labor costs for us! Miracles never cease.

It’s kind of a daunting task to take apart your washing machine. I never knew what lurked in the  under-belly of the machine; it’s pretty grimy, especially after 12 years of constant use. 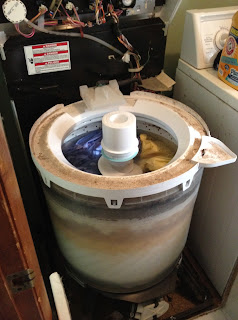 When my husband got home from work on Monday, we replaced the part, cleaned up the machine and turned it on. It drained right away. YAY!! 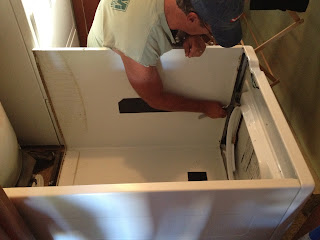 All is well in our laundry room again.

The moral of the story–don’t assume an appliance is beyond repair, especially a do-it-yourself repair.

2017 Update: Our washing machine stopped working again, but this time after watching another YouTube video and several attempts to replace a broken part, we decided that the machine was unfixable. We found a really decent machine for $200 on Craigslist that was only a few years old.

Have you ever been able to fix an appliance rather than buy new? Let us know in the comments.