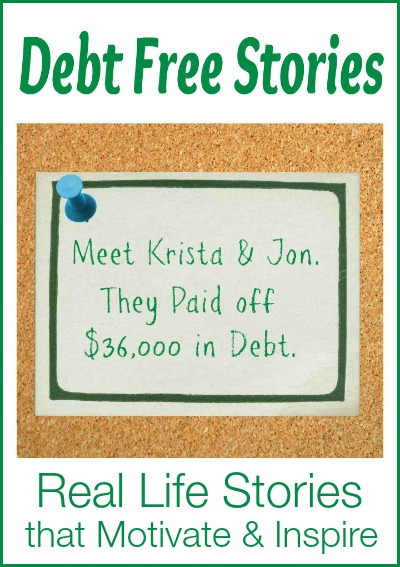 Welcome to Debt Free Stories! Today, I’m pleased to introduce you to Krista & Jon. They paid off $36,000 in debt and cash flowed graduate school. They blog at 2 Copper Coins.

1. Tell us about you and your family. Where are you from? What do you and your spouse do for a living? What are your hobbies? Include anything that you’d like to add to give the reader an idea about your personality.

Jon and I have been married for three years. We met in college and currently both feel drawn toward higher education. While we currently live in Oregon, in a few weeks we will be moving to western New York to both start new careers in higher education. We’ll live in a dorm (which fits us perfectly but we know sounds terrible to others) in our own apartment while I (Krista) work in student development providing mentoring/counseling/student discipline to the 150 women in the dorm and Jon will work right across the street as the assistant director of admissions. We’re energized by young people and are pretty sure most of our lives will be spent working with this age group. Jon’s been a youth pastor for 4 years and we’re very active in the Quaker church or ‘Friends.’

Apart from our careers we’re very into cultural experience, LOVE big city life with all the culture and delicious food it provides and our greatest lament in moving to Western NY is that there won’t be the variety that our beloved Portland offers us.

2. How much debt did you pay off? What kind of debt was it? How long did it take you?

After graduating with our bachelor’s degrees Jon and I had about $36,000 in debt between us. We also were working on paying for Jon’s master’s degree and then my own masters degree, which I completed in December 2013. With tuition payments and debt payments we spent about $60,395 between January 2012 and March 2014 when we became completely debt free with two bachelor’s and two master’s degrees between us.

3. What inspired you to get debt free? Was there a particular event?

I (Krista) have always held an aversion to debt and during that 6 month grace period after I graduated I started attacking my student loans. When Jon and I were married, we acknowledged that high paying careers were not on the docket for us, knowing that we wanted to have both comfortable and generous lives we decided that we would have to be incredibly diligent with our resources. The first step in this diligence was paying off debt.

The other factor was an experience Jon had at a pastors conference before we were married. He was speaking with an older pastor, in his early seventies, who was clearly anxious about his current work in ministry. When Jon asked him why he didn’t just retire and release some of this stress, he responded that he couldn’t afford to retire. The church paid for his home and a small salary and that was all he had. This motivated Jon to not ever feel like he had to keep working at a job that he was clearly overwhelmed by just because he couldn’t afford to do anything else. All of this plays into our desire for financial stability.

4. Did you follow a particular debt freedom plan or book, such as Dave Ramsey or Debt-Proof Living?

We did watch Financial Peace University with a few of our friends and that was encouraging. As we started deepening our interest in becoming debt free we found plenty of financial bloggers and other resources that encouraged us along the way. One of the reasons we decided to start our own blog was to hopefully do for someone else what those financial blogs did for us.

6. What are your top 3 – 5 tips for saving money/pinching pennies to put towards paying off your debt.

7. Who initiated the debt free goal? Were there arguments during the time you were working on your debt? How did you resolve the tension and arguments?

It was totally mutual and something we had spoken about before we were married. I had planned to work hard on repaying debt even before I was finished with college, and Jon hopped on board pretty quickly once we saw glimpses of what a debt free life could look like.

Our only arguments came over my masters degree. Jon was most of the way through his Master’s program when we got married, so finishing up didn’t take a second thought. However obtaining a master’s in student development was incredibly important to me and while it seemed illogical while we were already in debt, we’re grateful on this side for having done it all at once. We did find ourselves in passive aggressive discussions of the value of my education from time to time, particularly in the months where we wrote $2-3k checks to the university. It took a lot of talking through our goals and how this fit into our life plans to both sacrifice a lot for education and debt freedom at the same time.

8. Who handles the day-to-day finances in your home or do you work on it equally? How often do you and your spouse discuss your finances/budget/spending?

We are both self proclaimed budget nerds so we both handle the budgeting and financial decisions equally. If we had a leaning it would be that Jon focuses more on our investment strategies and I worry more about projecting what we’ll be able to save in any given month/quarter/year based on predicted expenses. We discuss finances far more than we would recommend for the average couple, but we have at least one finance-related conversation a day.

9. How did you celebrate when you became debt free?

We did a celebratory dance to Pharrell’s ‘Happy’ and put it on our blog. We felt good about that, even if we looked ridiculous.

10. What habits did you form while being debt free that will now stick with you for the long term?

The ability to assess whether or not we need something. We’re very skilled at living on less now, and we think that sets you up for a great future. When you have to live on less, you need less and therefore it takes a lot less money to make you feel financially secure. We won’t have super high paying jobs, but we know that we don’t need them to be completely comfortable.

11. Was there something that you gave up that you will go back to now that you are debt free?

We did cut back on eating out quite a bit and we are people that LOVE to try new foods. We’re not going all the way back to our pre-debt-repayment spending habits but we will incorporate a little more restaurant freedom into our current budget.

12. What are your financial goals now?

Currently our goal is to max out both of our Roth IRA accounts each year. We would also like to save $30k by May of 2015, which is a stretch but we like the challenge of it. This is because we’d like to buy a rental property to start generating some side income in addition to our normal jobs and eventually save enough to adopt a couple children in the next few years.

13. What advice do you have for someone that is paralyzed by their debt load, but wants to be debt free?

We would tell them to talk about it. Our culture still is a little iffy talking about our personal debts or any type of ‘failure’ and we see that slowly changing. Be a part of this change. Sharing brings others out of the wood work who can either relate to your story or may have helpful and creative ways that you can move toward debt freedom faster. When you keep it hidden debt becomes overwhelming and it feels insurmountable. We’ve witnessed in our own lives and the lives of others that putting everything out there, the specific numbers, has a way of releasing debt’s power over you and lifting the burden.

On top of that, we’re all about setting small goals. Paying off the first $5,000 in principal, getting one full student loan paid off, getting debt below $10,000. Each of these were small goals in our long journey toward debt freedom and they helped motivate us along the way.

14. Is there anything else you’d like to add that you think would help the readers who want to become debt free?

I probably said to much as it is! Thanks for letting us share, we’re very passionate about people being honest about their financial burdens – debt or otherwise.

Stop by 2 Copper Coins for more of Jon & Krista’s story and their celebratory dance to Pharrell’s ‘Happy’.

Thank you Krista & Jon for opening up about your debt free story and Good Luck on your move to NY.

Would you like to share your real life debt free story? You don’t have to be a blogger to share. Send me an email at familybalancesheet at gmail dot com. Put “Debt Free Stories” in the memo line and I will send you a questionnaire.