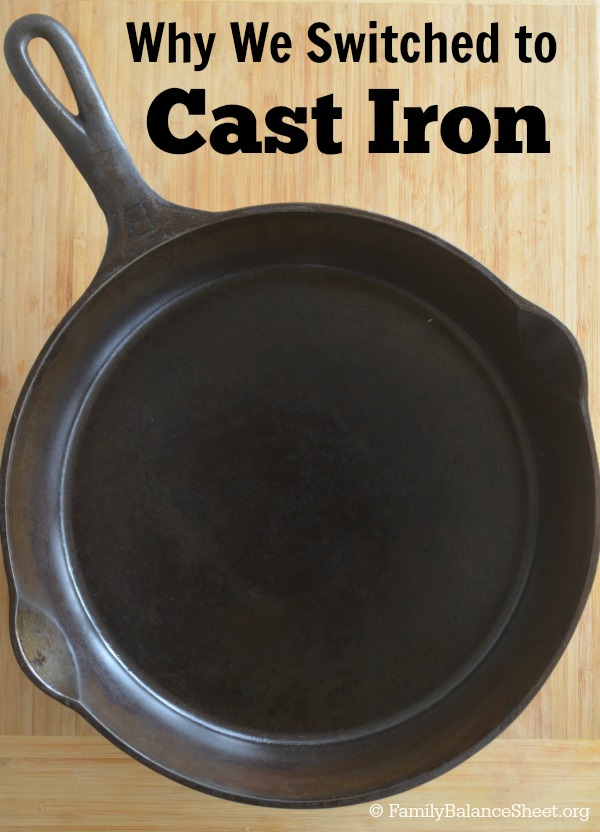 I have two Teflon pans that I have used for years. But I’ve decided that I want to walk away from Teflon’s non-stick convenience, due to potential danger of the chemicals that make up the non-stick coating.

But that’s just me. You can certainly continue on with your Teflon. I might be completely paranoid, but I was also inspired by the change when I found two cast iron skillets in my basement that my grandmother gave me a few years ago when she was cleaning out her farm house.

She had no use for them any more and she was happy that I was willing to take them. 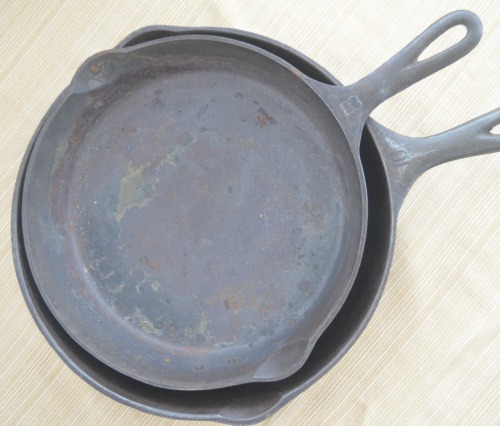 I had every intent to clean and start using the skillets when she gave them to me, but instead I stuck them in the basement closet and totally forgot I had the pans.

Until recently, when I was flipping through a Cooking Light magazine and I saw a recipe for skillet brownies. Yes, please!

So I pulled the pans out of exile and started researching the ins and outs of cast iron cooking.

The Benefits of Cast Iron Skillets:

Cast iron skillets have a whole community devoted to their collection, use, and care.  I found a Facebook page of gung-ho cast iron collectors. I have no interest in collecting, but I did turn to this community to get me started in cast iron cooking. I sent them some pictures of my skillets and they were delighted for me that I had acquired such nice pieces.

However, my skillets needed some care and the group led me to an informative article on how to restore, clean, and season a cast iron skillet.

But as I continued my research, I found conflicting opinions on the restoration. Some suggested a lye bath or oven cleaner to remove the old gunk. um…no thank you.

I’ll send the skillets back to my basement as I have no desire to mess with chemicals for a skillet. That’s why I’m leaving Teflon. I don’t want pans that need to be pampered. It’s a pan, not a pet. But because they were my grandmother’s skillets I do want to use them.

I decided on a simpler method to restore the skillets: a Vinegar Bath. 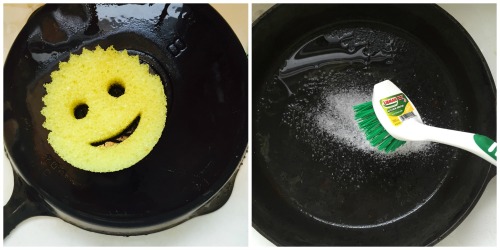 I scrubbed with kosher salt and a brush and a Scrub Daddy.

How to season a cast iron pan: 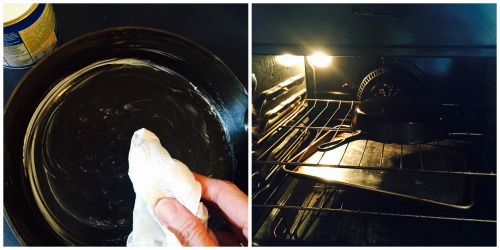 We eat lots of eggs for breakfast, so I have been using the pan often. The skillet isn’t hard to clean, but I can’t stick it in the dishwasher either and it does take some extra steps.

If I don’t have time to do this step of cleaning, I just let the pan sit on the stove until I can get to it later, but it really doesn’t need more than a quick wipe down. I am storing the skillets in the drawer underneath my oven, but Andrea, The Greenbacks Gal, told me that she uses her pan so much that she just keeps it on her stove top.

I’ve created a Cast Iron Skillet Pinterest board (of course) for recipes that I’d like to try. So far, I’ve just made eggs and browned taco meat and sausage, but there are so many possibilities. I can’t wait to make skillet corn bread…and a big giant cookie…and pie…and pizza…really it’s endless.

Do you cook with cast iron? Do you have any advice or tips on the care and seasoning of your skillets. Also, please share your favorite cast iron recipe in the comments.