Frugal living is NOT about feeling deprived. Frugal living is being intentional with our money and creative with our resources, so we have more to put towards the things that are important to us.

We want to live WELL, on LESS Money. 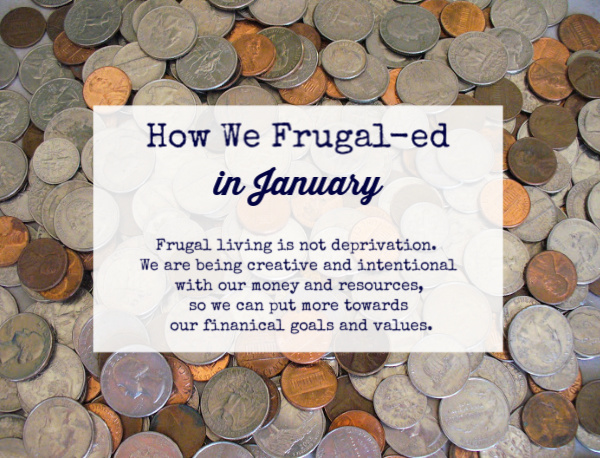 I started a new grocery shopping routine in January and it is working out splendidly! I write out my meal plan and place an online order at Giant on Thursday night for a Friday morning pick-up. On Friday morning, I pull into the drive through during my allotted time and my groceries are placed in the back of my car.

In the past, I made my meal plan and grocery shopped on Sundays. It would take about 1-2 hours of my Sunday afternoons and I wanted that time back. This new routine only costs me $3 for the pick up and I’m finding it’s well worth it. I stick to my list and random delicacies aren’t falling into my cart.

I earned a free ham at my grocery store in December, so I baked it on New Year’s Day. We ate some of the ham for dinner and the rest was chopped up and divided into 2-3 cup portions. Also, I cooked the ham bone in a big soup pot with water, celery, onions, carrots, and garlic for hours. This made enough ham stock for 2 batches of ham & bean soup. We ate one batch that week and the other is in my freezer ready to go. 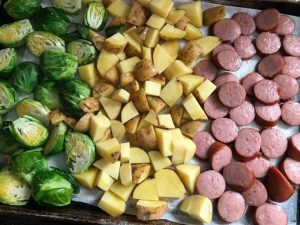 Sheet pan dinners have become a regular on my menu. They’re so easy. I fill a sheet pan with a protein, potatoes, and tons of veggies. I drizzle with olive oil and sprinkle with salt, pepper, and/or other seasonings and roast at 350 until cooked through, approximately 20+ minutes, it depends on the types of foods I’m roasting. Raw meat will take a little longer than already cooked sausage that is in the pic. I’ll link a few of my sheet pan recipes below.

Cook Once, Eat Many Times!

— We ate a lot of sweet potatoes in January. I bake 4-6 at a time. We each eat a half of potato for dinner and then I have 2-4 baked potatoes left over to use in other ways during the week, such as mashed or in quesadillas.

ALSO, I also strained the liquid that was left in the slow cooker to use in recipes. It is golden deliciousness! And then, I put the chicken bones, fresh celery, carrots, onions, garlic, salt, and pepper in a big soup pot and cover with water. I simmered for hours and had more homemade chicken stock. I like to keep homemade stock in the freezer.

— A local orchard is having an end of season apple sale before they close until spring time. I loaded up on their seconds and made my homemade sugar free applesauce. I store in the freezer and we eat it as a side dish many times a week.

I have an old savings account that I hold on to, because it’s at the same bank as my kids’ savings accounts. I chose this bank for the kids years ago when they had a summer program where a child could earn $10 if they read 10 books over the summer. Sadly, the bank ended that program, but not before my kids each earned $60 over the 6 years they participated.

Anyway, the account is still open and I decided that I would use it as a holding place for any “found” money. Found money could be from anywhere, such as cash back rebates or money found on the ground or money from selling our stuff.  I’m going to see how much I can find in 2020.

In January, I transferred $26.75 from my Ibotta (grocery saving app).

I challenged my email subscribers and members of my private Facebook group, Family Budgeters Unite!, to a No Spend January. Everyone needed to create their own parameters. My goal was to eliminate all unnecessary spending. It was an easy goal, because I stayed out of the stores. I still shopped for groceries, but as I stated above, I’m doing grocery pick-up now and that helps eliminate impulsive shopping.

However, I hit a snag about half way through the month when my washing machine stopped working. After an online search, I unplugged the machine for about 12 hours to hopefully reset the machine that might have gotten out of balance. When I plugged it back in, the machine worked for about 2 weeks before it stopped again. My husband consulted with a repairman who seemed to think that it was unrepairable. I bought a new machine that will be delivered in early February. It wasn’t exactly how I wanted to end No Spend January, but it is what it is.

How did you frugal in January? Share your strategies and tips in the comments.